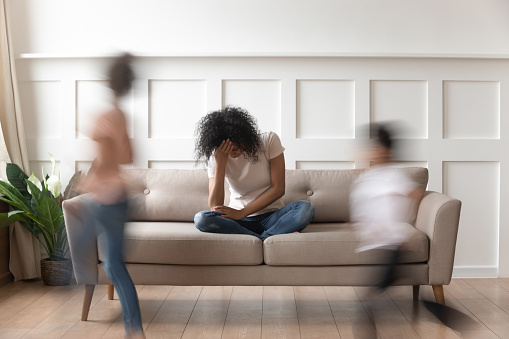 Adoption Isn’t for the Faint of Heart

Have you ever laid awake at night really worried that it shouldn’t be this hard? You’re not crazy for doing so. Parenting looks easy from the outside. Provide some basic rules, give the kid food, clothing, shelter, stability, and love, and boom: a well-adjusted, happy human. That’s what it always looked like to me at least. It seemed like that was how it was for my peers and, at least in public, that’s how it looked for other parents I knew.

My worrying got so bad that it led to insomnia. Like, really terrible, can’t-sleep-even-though-I’m-exhausted-and-sleeping-pills-don’t-help insomnia. I was convinced I was the broken factor in the relationship. I understood that my kids were hurting and had been abused and neglected, so it had to be my fault when things went sideways. I have come to appreciate the fact that my perception was wrong through the help of medication, therapy, and no small amount of talking to people who know better. Of course, I need to give my kids the grace to grow, but just because I do that doesn’t mean that every failed interaction with them is my fault. That knowledge alone has made a great deal of difference.

The other piece I had to learn was that it was okay for my kids to get angry at me, even if I was doing the right thing for them. I spent almost a year bending over backward to avoid doing anything that would cause my kids to have any bad feelings towards me. It was, in retrospect of course, absurd. I know that. I think that I knew it then, if just to some extent. I just couldn’t bear the thought of these poor, abused, neglected kids being upset about anything more than they already were.

Now, I understand that these efforts allowed them to live in a victim mindset. I was furthering their belief that it was the world’s fault when they were unhappy and they had no personal agency in the matter. I’m definitely not trying to say that what I did was right. What I am trying to say is this: their unhappiness isn’t always my fault. I can be the cause of it sometimes, sure, especially when I say it’s bedtime and they want to keep playing Minecraft. But that’s okay. It wasn’t until I hit my very lowest point that I gained the insight I’m hoping you will glean from this. You aren’t crazy. I’m not crazy. Parenting is hard, and parenting kids who have been adopted from difficult backgrounds can be especially hard.

There are so many unknowns in adoption. I can’t answer half the questions about my youngest daughter’s first days of life. I don’t know half of my oldest son’s history of growth, education, or abuse. The information I do have is static, sterilized, and incomplete. I have police reports detailing the times his birth parents were caught being abusive, but no idea how many times they weren’t caught. I have written testimony of landlords stating how bad it was when they cleaned out the family’s former dwelling places, but I have no idea how long it was that way. Was it cyclical, the abuse and neglect? Surely there are happy memories scattered amongst the ashes of a destroyed childhood, but I will never know. It is maddening and frustrating because sometimes navigating what feels like a simple conversation to me is like navigating a field of landmines for them. Sometimes, just asking if they want to wear their green shirt is actually asking them if they love me, and I have no idea that’s what I’m saying. So, if they get testy and angry and storm out of the room, I have no idea what just happened. If I brush her hair and braid it a certain way and it triggers a memory of her birth mom, I don’t know why she’s suddenly crying and angry at me. I can make good guesses,  can tread carefully, and can try to sidestep when it seems like I’m doing something wrong. I have traumatic stress from them exploding. I’ve had to learn to read their micro facial expressions and feel the tenseness in the room to know if they are going to snap. It isn’t healthy, and we’re learning how to heal. It is exhausting.

To the Parents of Adopted Kids: You’re Not Crazy

Yes, it is always about the kids. Yes, their needs need to be considered and yours, sometimes, need to be adjusted. But also, you aren’t crazy. You are probably being gaslit. I have stared my child in the eye and watched her take something she wasn’t supposed to. I have heard that very same child in the very next second say, “I never took that. You’re lying. You’re being a bully. You always think I did something wrong.” I can show her video proof of her hitting her sister, and she’ll swear until she’s blue in the face that she never, ever did that, despite the video, the handprint on her sister’s arm, and her sister crying and telling her she did it. It doesn’t matter. Her need for self-preservation runs so deeply that she cannot admit she did something wrong without it feeling like she’s destroying herself.

I have cried so hard that I’ve vomited over choices my children have made, not because I could’ve changed those choices, but because I was so duped by the lies they constructed. Every time I thought something was off, they’d have an excuse ready, and I wanted to believe them. I think that is the part that hurts me the most. I am wildly naive despite years of knowing that, because of their experiences, I cannot trust them to make the best decisions or always tell the truth. So, when they actually do tell the truth, I’m never sure whether or not to believe them.

I’m letting you know all of this so that you understand you are not alone. It is hard, but you are not crazy. And even if you are partly to blame, it is not all your fault. Find a good counselor who is knowledgeable about adoption and dealing with the trauma surrounding it. It is worth the time and effort involved.