I’m not the savior of anyone. I’m not a superhero. The kids are a gift to me, not the other way around. They had parents before me, I didn’t have kids before adoption.

2. It’s harder than it looks to be an adoptive parent.

Lifetime, Hallmark, and the musical Annie paint a picture of adoptive bliss: children who are thankful and grateful for adoption and kids who happily integrate into an entirely new, scary, different world. I’ve had hours of training and I still sometimes break down crying over how difficult it is to keep it together when their trauma is making their life hard.

3. It’s harder than it looks to be a kid who was adopted.

Somehow, along the way, society got the impression that kids were supposed to be grateful to be removed from their biological parents and thrust into a whole different world. When they’re grown, they may understand and be thankful we were a soft place to land. I never want them to feel like they owe me something. I didn’t marry my husband expecting him to be grateful to me every day for letting him be married to me. That would be absurd. So why would anyone expect a kid who didn’t ask for so many challenges early on in life to be grateful for adoption right off the bat?

4. Training doesn’t cover all the issues you might face.

I was entirely too confident I would know exactly what to do if a problem happened. I had hours and hours of training, read so many books and blogs, and watched probably hours of videos on working with kids from hard places.

The first bad day my oldest son had resulted in him acting in a scary way that made me fearful he would hurt himself and maybe others. There was nothing in those books, blogs, videos, or training to prepare me for my tiny boy to scream for two hours and uncontrollably tantrum. I called my agency to ask for help and no one really knew what to tell me besides keep him safe. Which, I was already doing; and also, was as effective as telling an anxious person to calm down.

5. Sometimes there is no right answer

Insomuch as people are all different, trauma affects everyone a bit differently. Some people get very quiet and retreat into themselves when they are scared or sad. Some people yell and throw things. I was blown away by how differently my kids reacted to the same situation. Because they each interpret input in different ways, their responses are wildly different. An unexpected knock at the door sent one kid to hide in a closet, one under a coffee table, one kid to scream and run towards the door, and one kid to simply sit down and cry. I was not prepared. I was also not prepared for how I felt based on each reaction. Mostly, it turned out I felt grief for my kids. A knock at the door shouldn’t cause such drama. And yet.

6. There is a difference in felt safety and actual safety.

I could wrap my kids in bubble wrap, pad the walls, play soothing music, and never raise my voice above a whisper. If my kid doesn’t feel safe, it doesn’t matter. My kids will respond the way they feel. So if I don’t mean to call my kids to the dinner table and I raise my voice to be heard, my kids that feel safe will come to the table. The ones that don’t will respond in … different ways. For example, one of my kids threw herself to the floor, covered her ears, and screamed for ten minutes. It was a trauma response. It was terrifying, frustrating, and heartbreaking all at once.

7. Sometimes caseworkers don’t have the answers

I called my caseworkers hundreds of times. Sometimes they had information—sometimes not. I asked how long the case might go and I got different answers on different days. It wasn’t them trying to deceive me, but sometimes they could only give their best guess.

Sometimes a child will enter into care and birth parents can’t be found or the information they leave is incorrect. Everyone is operating on their best guess. I didn’t know my one daughter was terrified of showers until I put her in the shower and tried to wash her hair. There was no documentation to state that. She was too little to explain that to me. It just was a thing we had to adapt to. I can’t beat myself up for not being psychic. I could lose days lamenting all of the things I didn’t know about my kids. If I had known what foods made them sick and what clothes felt the nicest on their skin I could have had nicer days. Yet, I didn’t know. You can never know everything and that’s okay, really.

9. Trust, but also use cameras in common areas.

I have resolved so many mysteries and broken up so many fights by having little cameras that link to my phone. I wish I had installed them sooner. My kids’ idea of truth is sometimes more creative than truthful. So. To keep yourself and your kids safe, use some monitors and alarms. It seems paranoid, but it isn’t.

I figured I had things I could and could not deal with. The problem with that is sometimes a kid has a mental health issue that is undiagnosed when they come into your care. I find myself caring for kids who I would have said no to had I been aware. But, turns out, the things I was scared of were less scary than the things I couldn’t have expected. There are no promises in foster care and adoption. Just like there is no way to know for certain that a biological child won’t end up with mental or physical health concerns, there’s no way to be certain a child will be healthy. 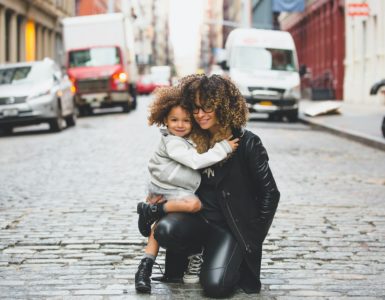 Getting Your Home Ready for Adoption

As you get ready to step into this new phase of life, whether you already have kids or not, the adoption process takes time. While stocking your nursery and pantry may be easy, the process of getting your home and...