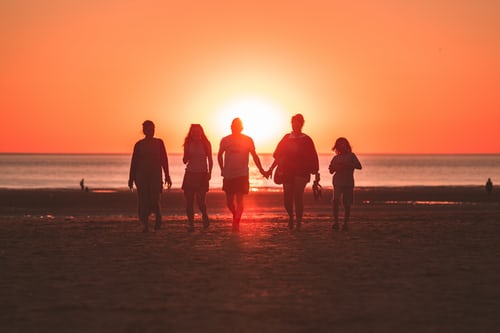 Three precious foster children entered our home in October of 2014, two little boys and an infant girl. My husband and I had never had children in our 14 years of marriage and we weren’t entirely sure what to do. The first day was a rush of paperwork signing, rule explaining, and trying to figure out what to do once the caseworkers and friends who had come to help us left. Struck with the sudden realization that we were it for taking care of three whole humans, my husband and I sort of stared at each other in disbelief and not without a little bit of fear.

Yet, even in that disarray and confusion of asking, “What do we do now?” there were a few precious memories made. The boys delighted in their new room. The baby settled beautifully. And my husband, who is not a baby person, was absolutely smitten. I remember being handed my little girl and thinking she weighed much less than I expected. I also remember thinking, “don’t forget this moment,” when I snuggled her close for the first time. Overwhelmed and somehow unprepared for parenthood after months of classes and reading, we went to bed the first night assuming that these children were probably just visiting.

After lots of testing to determine that our 8- and 9-year-olds were behind in school, they were placed in school. A year behind everyone else in their classes, they were still the smallest in their classes by a few inches and a dozen pounds. School was a chore. A painful, exhausting chore. They didn’t understand all the fuss and couldn’t deal with homework. We’d find worksheets balled up in the yard that they just didn’t want to do. There were weekly visitations with biological parents. The baby was left to cry in her car seat for most of an hour. I was trying to build a relationship for the sake of the kids. The longer the kids were with us, the harder it was to try. Little by little, bits of their abuse history would trickle out in stories. In an absolutely unaffected voice, the 9-year-old would tell us about the abuse he experienced. As time went on, it became harder and harder to smile when I’d drop the kids off for a visit.

There are some years that I struggle at Christmas time; but that year, I would have put Buddy the Elf to shame. The whole month was filled with fun Christmas activities which turned out was mostly just me doing an activity while the rest of the family stared at me in confusion. However, the payoff came on Christmas day. Our oldest boy’s eyes were the size of dinner plates when he came out of his room and saw the tree piled with gifts. We try to make Christmas about more than just presents, but that year we just wanted them to experience a good Christmas at least once if they were going to return to their biological family. So much of that year was spent making memories just in case they were the only great memories they’d get to have with us.

Seven months flew by quicker than I could have imagined with court hearings, visitations, and birthday parties for the boys—the only ones they had ever had. July came and we were trying to figure out if they needed to be re-enrolled in school for the fall. We didn’t want to go through the bother of testing and getting all the supplies if they were going to end up elsewhere. We didn’t mind providing their things, not at all, but we wanted to make sure they had what they needed for whatever school they’d be attending. Their biological parents got a 6-month extension on their case. It was around that point that family and friends were wondering if we’d adopt the kids, and we honestly were no closer to knowing the answer to that question than we had been on day one.

We went to the beach. It was their first time and it was a blast. Even the baby wore herself out splashing and playing. We weren’t sure if it was a grand hurrah before saying goodbye or just another sweet memory to put in their memory banks. It was bittersweet for me to say the least. I couldn’t help but wonder if this was the last vacation we’d get to take with them. If this was the last time I’d hear their squeals of joy while they bounced in the waves. It was a beautiful but difficult time for me.

We were officially asked if we would adopt if the court decided on parental right termination. Absolutely. Yes, please. We celebrated the baby’s first birthday and she delighted everyone by destroying her cake and smashing it into her hair. She still has a few toys from that day that are especially dear to her. By this point, we were hoping we would get to adopt, but were still waiting out the court extension to see if we would be able to. We had mixed feelings about it. The kids had started to have some behavior issues once the honeymoon period wore off and they were used to us. Some of those issues manifested in hour-long screaming fits and self-harm. It was not a great time. We were committed to helping the kids however they needed it, but the idea of this forever being our reality was a little daunting, to be honest. Still, though, we knew this was a better option than them being placed back into an unsafe situation. We are pro families staying together if they can, but the abuse was so catastrophic for our kids it wouldn’t have been a good situation for them to return to.

One year later, we were no closer to knowing for sure if these were our kids forever or just a short while. That was hard. However, we were happy to have them as long as we could to keep them safe. It was an emotional time and we were often afraid. The kids had deep psychological trauma that, to this day, we are still working on.

In the end, we were able to adopt our children. The first year was so difficult. It was a whole lot of unknown. A year in, we were absolutely attached and totally smitten with all three kids. We knew their personalities, strengths, and weaknesses. The baby had everyone wrapped around her little finger. I am so glad these kids get to be ours forever. It could have gone either way at one point or another if the biological parents had decided to make healthy, lasting changes. I would have been happy for them if they could have. Unfortunately, generational trauma is a thing and they were dealing with their own issues. Regardless, our first year as a family was a wild ride. I’m so glad for all the time we get with our kids who are now in their teens and in elementary school. It is weird to think back to those first days and realize how they have changed.